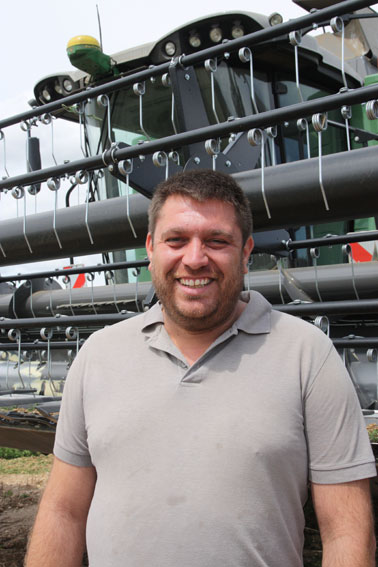 Steffen Peil runs a 150-hectare arable farm in partnership with his father in the Zülpicher Börde, a lowland plain in the southern part of North Rhine-Westphalia. One of his specialist areas is the production of spinach seed. Around one fifth of the farmland is set aside each year to grow the 2.5 to 3 mm seeds, with 800 to 1200 kg of spinach seed per hectare harvested in July or August. The secret to Steffen Peil’s success is minimizing harvest losses. Andreas Frangenberg visited the Peil Farm to find out how he does it.

The thirty-five-year-old agricultural engineer was born and raised in a farming community and has farming in his blood. “Being outside in the fresh air much of the time, seeing how nature develops and changes, how seeds sprout and thrive – for me, that’s what farming’s all about. And of course, producing a successful harvest at the end of it. But I have to admit that I like some crops more than others, and spinach is definitely one of my favorites”, says Steffen Peil with a grin.

Alongside spinach, they also grow varying quantities of wheat, barley, potatoes, spelt, sugar beet and commercial vegetables on the farm. This year, for example, some 15% of the fields are put down to dwarf beans; destined for the nearby canning factory, just like the broad beans and peas grown in other years. 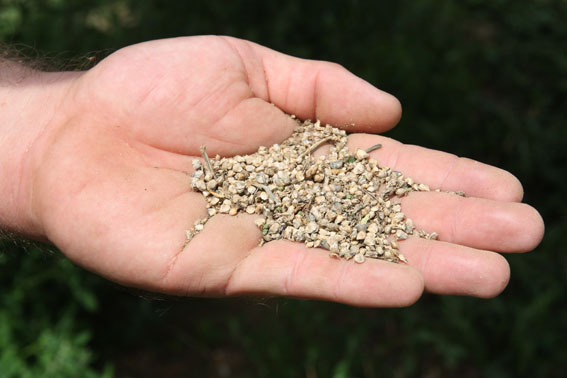 So much more than a hobby

Steffen Peil has a fascination with agricultural machinery; indeed, it is his main hobby, alongside his long-standing service as a volunteer firefighter. “The Rhineland region is certainly special in terms of its very high level of mechanization”, he says with a touch of self-criticism. But then again, he also uses his farm machinery to help his neighbors. “We do around 150 hectares of contract combining each year, which, together with transport work and compost spreading on neighboring farms means that I can make full use of my fleet.”

Steffen Peil sets great store by the quality of his work. This is especially important with a premium crop like spinach seeds – and with eight years of experience under their belt, Steffen and his father Josef Peil have gained a great deal of expertise in this specialist area. “We are quite exotic animals around here. I know of only two other seed-producing farms in the region and we collaborate a lot. The real strongholds in spinach seed production are the Netherlands and Denmark in particular and so this business is regarded as something of a mystery by a lot of people here in Germany”, explains Steffen Peil. 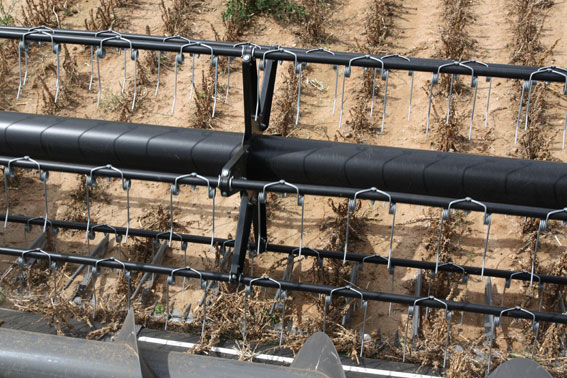 Not much leaf, but plenty of stem

The seed for seed production is supplied by a Dutch breeder who also buys the seed the Peils produce which is destined to be grown commercially as a vegetable crop. Unlike commercial spinach growing which is about maximizing leaf growth, spinach seed production prioritizes stem growth, because the stems of the female plants produce clusters of inflorescences in their leaf axils, each cluster showing up to ten florets. So, the Peils sow both male and female plants in strips, then mow the male plants after successful pollination. The female plants with the seeds are left to grow to maturity and then harvested. 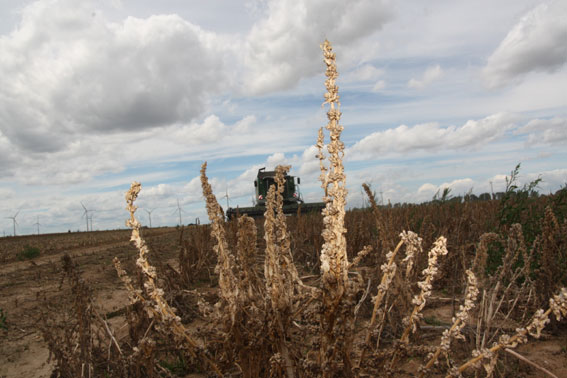 Plenty of stem, but not much leaf

Interestingly, the leaves of the seed-production plants have no taste. “They wouldn’t be worth growing as a vegetable, because it’s only the hybrid offspring of these plants that produce the tasty commercial spinach crop, we are familiar with in fresh or frozen form”, explains Steffen Peil. And since the aim of seed production is to grow not leaves but the longest possible stems bearing large quantities of seed, Peil applies only modest amounts of nitrogen fertilizer. Typically, only half the quantity of leaves usually found on commercial spinach plants is sufficient in spinach seed production.

Other than that, there is no great mystery to sowing, spraying and cultivating: a good tilth, a friable seedbed, precision drilling to ensure single-seed placement as with sugar beet, and efficient weed control are key. The breeder permits the use of only one herbicide to avoid adverse effects on the germination capacity. This means that mechanical weed control with a 12-row beet hoe combined with manual weed control play an important role. With 25 work hours per hectare per year, spinach seed cultivation is very labor intensive. 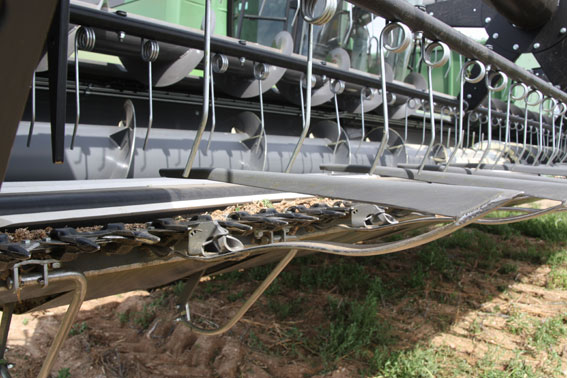 Harvesting is so exciting...

The Peils are delighted with the harvesting equipment they have had for the past four years. The Fendt 6335 C combine harvester with a 7.7m PowerFlow header has reduced previous harvest losses of typically 15–18% to a maximum of 5–8%. In view of average yields of just 800–1200kg/ha, this has a substantial economic impact.

Peil sprays the spinach when a steady spell of dry, sunny weather is forecast in August. He has to harvest three days later because otherwise the seed would be shed by the slightest breath of wind. Steffen Peil’s partner Elisabeth Hänsel usually does the harvesting, and she obviously feels very at home on the Fendt. 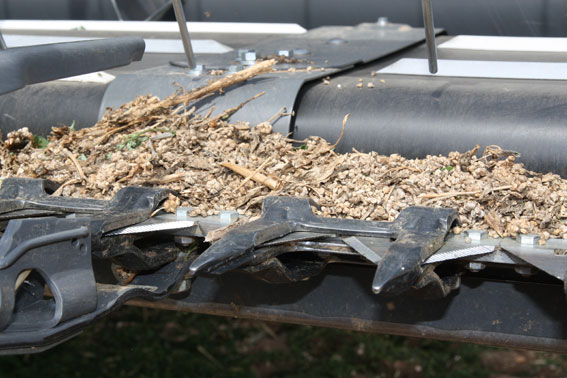 “We weren’t particularly happy with the usual short header on the previous combine, because it produced high losses. It wasn’t until we switched to the Fendt with the PowerFlow header that our harvesting setup really came together”, remarked Stefan appreciatively. “The long table and belt on the PowerFlow header ensure that the seeds end up where they belong – in the grain tank and not on the ground as volunteers. The Fendt makes it easy for us to thoroughly clean the entire machine after the cereal harvest, so we can guarantee that no cereal grain gets into our spinach seed.”

The Peils are also delighted with the cutter bar and crop lifters. Steffen Peil is particularly impressed by the Schumacher cutting system which is used here as standard: “I’m always very critical. But when you can remove or install all the crop lifters on a 7.7m header in a matter of minutes, without a helper and without tools, it speaks for itself. The quality of the face-up/face-down sections is also second to none. During the past four years, I’ve only had to change the sections twice, despite contract threshing, dealing with stubborn spinach stalks and the fact that the short cut means that soil inevitably gets into the sections. What’s more, it’s easy to change the sections and you don’t need to remove the cutter bar. We think the quality of the material is superb – and I really can’t think of anything you could do to further improve the Schumacher cutting system.” 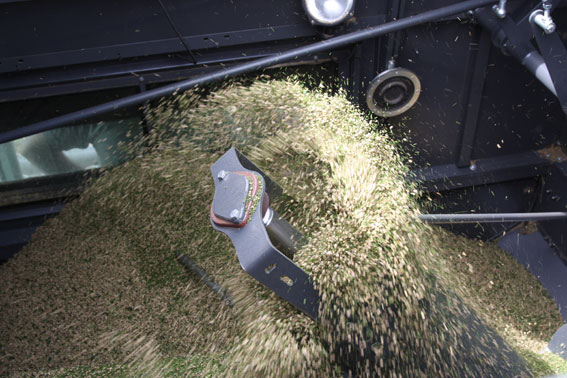 Spinach seed in the grain tank

Spinach seeds require a different residual moisture level than those 14% required in grain. The breeder expects the crop to have 10% residual moisture, so he has to wait for a dry harvesting window. Once harvested, the seed cannot be dried mechanically as this would impair its germination capacity. The solution is to harvest the seed as dry as possible and then transfer it to ventilated hoppers and keep it ventilated until the breeder collects the seed. “Since we can’t warm the air flow, we must harvest during a stable spell of good weather and hope for a low relative humidity so that we don’t introduce any additional moisture into the harvested crop via the ventilation system”, explains Steffen Peil.

“Growing spinach seed is considered rather exotic. I’m a machinery fanatic, so when the equipment doesn’t perform as it can or should, I tend to get very grumpy. And then I can be a bit of a nightmare”, admits Steffen Peil. “But with the Fendt and the PowerFlow header, we have the perfect setup. Now all we need is the weather to play ball and yields to be right, and I might actually be happy!”