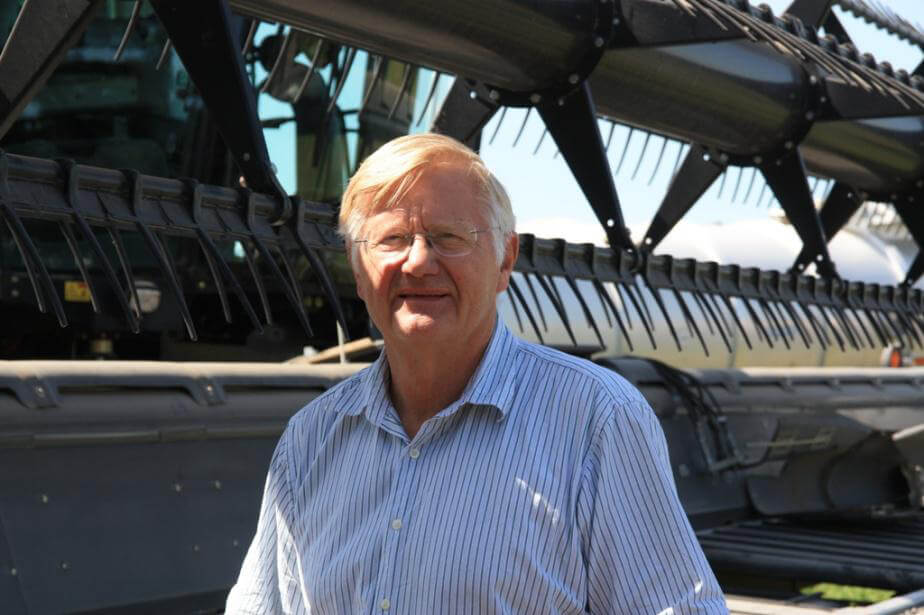 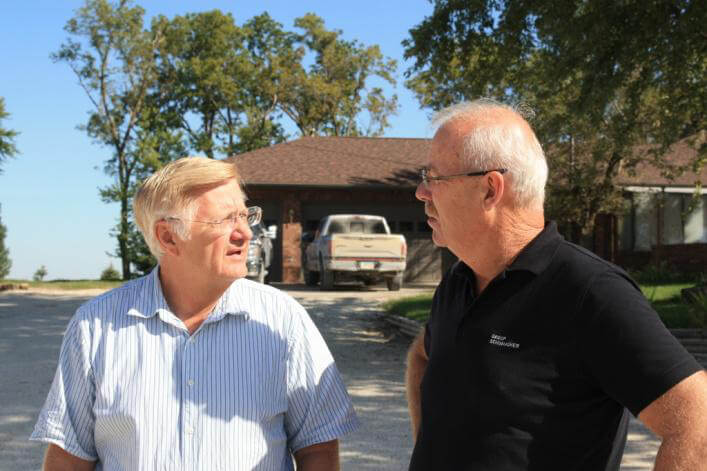 Stan Kading and his two sons Ash and Alex farm about 6,000 acres of corn, 6,000 acres of soybeans, and an astonishing 500 acres of grassed waterways in Iowa. They have been using Schumacher harvesting technology for almost a quarter of a century – and just don’t see anything that might top the reliable cut, the smooth operation, or the low wear and low maintenance requirements of this well proven technology.
The Kading Ag. Inc. is located near Casey in South-West Iowa, on some of the higher parts of the state, and pretty much on the divide between the Mississippi and Missouri river systems. The rolling landscape has been the home of the Kading family for more than 100 years. Stan, born in 1951, followed his father as manager of the farm in 1970. With his two sons Ash and Alex, aged 41 and 38 today, the next generation got involved in the management of the family business as co-owners in 1998.
The topography of the landscape is the cause for one of the farms’ peculiarities: about 500 acres of grassed waterways, which are set up and / or maintained every year to control run-off, thus significantly reducing soil erosion. Since about World War II, farmers in this area have been using conservation practices such as grassed waterways in order to keep the valuable top soil on their ground instead of losing it to adjacent water bodies, roads or other non-farming areas. 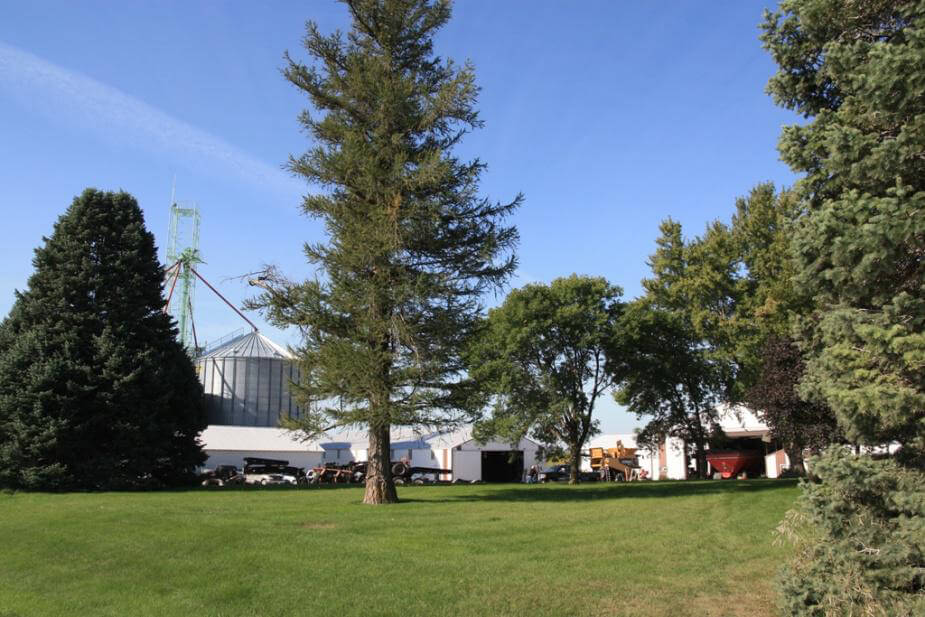 Dream job with a clear “but”

“I enjoy working with mother nature, together with my sons, and I enjoy living and working independently and in freedom. I get many positive impulses from family and friends, from my religious belief, and from being able to live out my creativity”, says Stan. And yet, for him there is a decisive drop of bitterness: “Our agricultural policies have taken away 40 to 50 percent of the freedom we used to have”, he says. “Some of the rules and regulations even force the smaller farmers out of business. These regulations often change the financial picture for us and our fellow farmers, and I do not think that this is right.”
Being up to date and knowledgeable is key for both Stan and his sons. Before taking over the farm from his father, Stan went to college to observe classes in business law. At the same time, he continued to work on the family farm. “Farming is a business”, he says with a smiled, “but I observed classes for the information, not for the degree. Once I had the legal information I needed, I quit attending and solely focussed on working on, and then managing, the family farm.” Times since have changed, and so Stan is glad that both sons got their degree in ag business before joining the family enterprise. 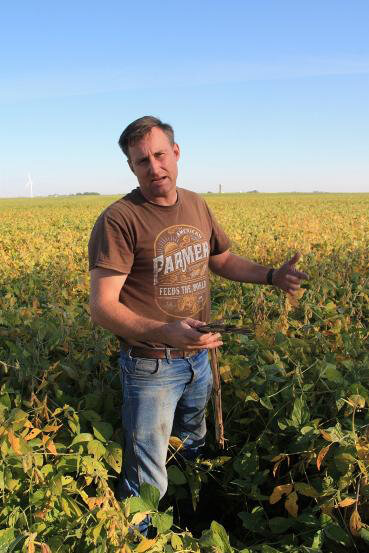 "These corn stalks need to be cut as well when we cut the beans", says Ash Kading.

24 years – and as convinced as can be

The first Kading soybeans were planted by Stan’s dad in 1953. “They would yield about 20 bushels per acre on average. Today, we plant about 172,000 seeds per acre, and that is usually done between April 15 and May 10. This high seed density is an insurance for good and dense crop stands, which will yield an average of about 60 bushels per acre. Top yields can even reach up to 78 bushels per acre nowadays”, says Stan. On the one hand, growing soybeans and Bt-corn in a rotation is a normal cropping sequence in Iowa. On the other hand, however, particularly robust technology is needed when it comes to harvesting the beans on the Kadings’ farm.
Along with the grassed waterways, the family has been using minimum tillage for decades. That is why – in addition to the dense soybean crop – corn stalks from one or even two previous corn harvests will also stand on the fields. When the corn is harvested, the cobs are ripped off the stalks, which will remain in the field half bent, half standing. “And we have clearly noticed that stalks from Bt-corn will rot a lot slower than non-Bt varieties”, explains son Ash. “So when it comes to harvesting the beans between September 15 and mid October, the knives of the header will have to cope with all the soybean stems and all the corn stalks at the same time. And to tell you the truth: I would not know any harvesting system that could get that job done as smoothly and as reliably as the Schumacher System.”
Harvest will take place as soon as beans are ripe to avoid losses due to bursting pods. By then, the moisture content will be about 15 percent. Threshing 100 acres per combine per day is average on the Kadings’ farm. Beans will be stored on-farm and either be marketed on a contract basis or throughout the year when the Kadings feel that the price is right. “Contracts which you sign early in the season can break you easily when the yield will not be up to your expectations. So we always go for a careful ‘split marketing strategy’”, says Stan. When sold, beans will be processed for oil and meal. The oil is processed for human consumption, biodiesel etc., and the meal used as cattle feed.
“With the years, our headers would get wider and wider”, Stan recalls. We started with 12 foot headers, then had 13, 15, 20, 30 foot, and finally the 40 foot headers we are using now. One year after we switched from to the 20 to the 30 foot headers, we were anything but convinced that the original system mounted on those headers was running well. When we got the recommendation from some AGCO engineers to use the Schumacher System instead, we followed that advice. That was about 24 years ago, and as we use this technology to the very day, this clearly shows that we appreciate the performance”, he says. 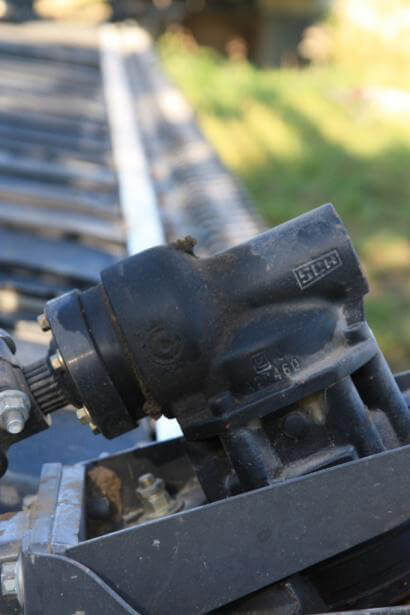 Doing its job reliably on the flex draper headers: The SCHUMACHER knife drive.

You hardly ever need service in the first place!

The Kadings are using the Schumacher System on all their five combines. Three Gleaner Super 7 combines and two CAT / Class Lexion 760 combines, all about two years old, are equipped with coarse 7 tpi knife sections, steel guards, cutterbars, roller guides and planetary knife drives from Schumacher. As is standard on the US market, all headers with the Schumacher System come with top and bottom rollers, thus ensuring a really smooth running. “This system works well indeed. We go at about 4 to 5 miles per hour in the beans. And when you cut beans, you want to do that as close to the ground as you can. That is why we use flex headers. Cutting so close to the ground usually also means pretty much wear – but the Schumacher System comes with a convincingly good wear factor”, says Stan.
“I also appreciate the straight cut”, he adds. “Image that you hold a sheet of paper in one hand and a pair of scissors in the other. For the best result and the least effort, you will always try to cut that piece of paper in a straight line, not with an angle. So why should we cut our beans with an angle instead of using the most efficient way, a straight cut? And that is exactly what the Schumacher System does. In addition, this system offers a very quiet and smooth running, thus requiring lower maintenance and causing less breakage at the same time.” Stan is convinced, that “these top and bottom rollers make a lot of a difference with regard to breakdown, power requirements and smoothness of the operation.” And there is another aspect that Stan and his sons like about the Schumacher System: “You hardly ever need service”, says Stan, “but if you do, parts will be readily available”.
Since both sons joined the family business quite some time ago, Stan now enjoys more spare time than before. “My hobby, in addition to the ‘number one hobby farming’, is building own equipment. It has always been an enjoyable challenge for me to repair broken things, and I dream of building my own working steam engine one day.” Since managing the Kadings’ farm is in the capable hands of Ash and Alex now, that steam engine might indeed become as real at Kading Ag. Inc. as the reliable Schumacher technology has been a reality for the last 24 years.